No major surprises in the preseason media poll as Alabama lands on top of the West Division and the overall championship voting. Florida is expected to make it three straight Gator/Tide SEC Championship Game showdowns by running away with the East Division.

Remember yesterday when the lobby at the Wynfrey Hotel was complete chaos? Not so on Thursday. Without Alabama or Auburn (coming Friday) only a few stray Arkansas and Georgia fans are milling about so far.

SEC MEDIA DAY 2: And we’re off

It’s way too early for sports writers to have consciousness, but Bobby Petrino has stepped to the microphone to get this party started.

SEC director of officials Rogers Redding just spoke about rules changes. There aren’t many. The most notable difference concerns banning the 3-man wedge on kickoff returns.

Keep an eye on the Twitter feed for updates throughout the day.

Here is the second batch of videos from the first day of SEC Media Days in Hoover.

We resume with the flashiest dresser of the day, Dont’a Hightower.

Finally, here are a few looks inside the chaos that is Alabama’s appearance at SEC Media Days. First, here is a quick tour of the facilities.

Is he eligible or not? That’s the question floating around SEC Media Days surrounding Alabama defensive end Marcell Dareus.

A story on the Tuscaloosa News website cited a source who said Dareus had been ruled ineligible because of alleged dealings with a sports agent.

Not true, says a UA spokesman who couldn’t comment further than to say the story was not accurate.

Read more tomorrow and possibly later today as this story continues to evolve.

SEC MEDIA DAYS: So it begins

It’s a madhouse already in Hoover as Nick Saban and his players have arrived at SEC Media Days.

As expected, dealings with agents is the No. 1 topic.

SEC commissioner Mike Slive said it is time for the NCAA to change rules on the issue while not condoning any kind of improper contact. He also said schools should be able to help student-athletes who want to pursue a job in professional sports just as it does with those choosing medicine.

Stay tuned for more. We are experiencing wireless issues here in the media compound. When they improve, I’ll load videos of the mob scene in the lobby as well as a video tour of all the places you’re used to seeing on TV.

Go to the Twitter home of the blog for more updates. http://twitter.com/DailyBamaBlog

Come back for all the media days coverage possible

This is just a friendly reminder to bookmark The Bama Blog so you don’t forget to come back for all the SEC Media Days coverage you can handle.

There will be a video tour of the whole compound at the Wynfrey Hotel in Hoover, behind the scenes snap shots and all the latest news and interesting soundbites from the SEC’s biggest names.

A chuck of the coverage will land on the blog’s companion Twitter site (http://twitter.com/DailyBamaBlog) so sign up to follow all the updates there. Here is the complete schedule of this week’s event (all times Central):

The SEC just released the preseason coaches all-conference teams with a notable difference from last season’s. Unlike in 2009, the league did not specify which players were unanimous selections.

That is interesting considering the witch hunt of last year’s SEC Media Days when Steve Spurrier’s ballot turned out to be the one who did not include Tim Tebow on the first team. There will be no such controversy surrounding this year’s Heisman Trophy winner, Mark Ingram. He is one of six Alabama players on the first team — tops in the conference. Florida had 10 overall to Alabama’s nine, but only three Gators made the first team.

Update: The SEC athletic directors voted to keep vote totals from being released this year, according to SEC spokesman Charles Bloom.

And now, the complete listing:

The SEC just released the final schedule for next week’s football media days. Now we know which three Alabama players will get the party started next Wednesday afternoon.

From a reporter’s perspective, those three make up an all-star team of interview subjects. McElroy is easily one of the most insightful athletes I’ve met. He’ll be great, and I’m sure my colleagues agree with my sentiment. Hightower is right up there with the QB as is Ingram who has great patience when answering the aforementioned bevy of Heisman questions.

The circus in Hoover begins next Wednesday and runs through Friday. Stick with The Bama Blog for all the coverage you can stomach.

Here is the rest of the player lineup:

On a side note, the Yankee Universe suffered another big loss this morning when George Steinbrenner passed away from a massive heart attack. It’s a sad day for sports.

The blog is back in town

The hibernation is over and, yes, the blog is back in town.

SEC football Media Days are just a few more away, and you know what that means. The only season that really matters is lurking around the next corner.

So stick with the blog. The quiet days are coming to a close and its almost time to get serious.

But before then, check out the Bama Blog video to the day to hold you over.

And in a slight twist, the blog would be remiss if it didn’t pay tribute to one of the greatest voices in sports, now silenced. Enjoy this homage to Yankees public address announcer Bob Sheppard, who died Sunday at 99.

There is no mistaking the difference between the football and basketball editions of this event. The buzz is muffled in Birmingham today compared to what it was a few months ago in Hoover.

But there were still a few stars.

Kentucky’s John Calipari led off the day’s events with an hour in front of print reporters. He sounded optimistic about the SEC’s ability to bounce back and even predicted seven or eight league teams would make the NCAA tournament. Alabama coach Anthony Grant agreed with that.

Read more tomorrow and in the coming days about some of the story lines coming out of the event.

In this amateur photo I took, notice the difference in the crowd surrounding Calipari compared to the Arkansas women’s player in the foreground. 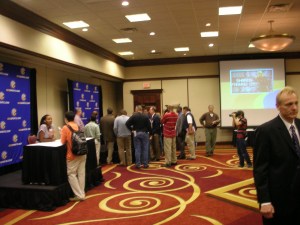 A few notes for a slow Sunday evening

It’s been a nice quiet weekend following the three SEC Media Days spent in Hoover. That event is pure madness and if you read the blog, you’d know that.

Take a look at the new poll question just posted. It is a feature that has gained popularity as of late and I encourage you to keep at it. This week’s question: Who will be Alabama’s MVP this fall. Vote away.

If you read Sunday’s paper, you’d see a John Parker Wilson story I wrote based on an interview conducted Saturday afternoon in Decatur after he signed autographs at Martin’s on the Beltline. As I was leaving, a group of teenage girls leave the store, I was reminded of his “heart throb status.”

These young ladies nearly fainted as they screamed “Oh my God. He is soooooo hot.” It was funny so I thought I’d pass it along on this slow Sunday evening.

MEDIA DAY 3: Lane Kiffin steps to the mic, what will he say?

New Tennessee coach Lane Kiffin is easily the most anticipated speaker of the week. Here’s what he said:

(Photo by the Associated Press)

Word is Steve Spurrier confessed to being the lone SEC coach who picked against All-Everything Florida quarterback Tim Tebow for first-team all-conference. He did the talking in one of the other press conferences for television cameras or radio crews.

Stay tuned for more details on this most pressing story of the day.

UPDATE: Spurrier told the writers that his director of operations did the voting and he did not look close enough at the ballot before sending it off.

After the controversy began, he made a comment among staff members asked who could possibly vote against Tebow. His operations guy confessed. Spurrier then called the SEC and asked to change his vote and was granted that request.

“I didn’t sleep worth a dang last night thinking about it,” Spurrier said.

That’s it. Story over. Now we can resume life as it was before this scandal broke.

(Photo by the Associated Press)