Greetings from the past. This is one of those posts I scheduled to go live before I left on vacation last week.

It’s appropriate since today marks the seven-month anniversary since Alabama picked up that crystal football out in Pasadena.

So with summer at its height, but with football season inching up on us, check out a few look-backs at that night in the Rose Bowl.

We start with the video I took in the moments just before and after the final snap.

A few more of mine:
Nick Saban mobbed at Disneyland
Walking into the Rose Bowl
Alabama takes the field before the game
Rolando McClain after the game

In case you missed it, here is the Associated Press story about the delays facing the new Nick Saban statue scheduled to go up outside Bryant-Denny Stadium. Remember when A-Day was discussed as the unveiling date?

TUSCALOOSA, Ala. (AP) — A statue of Alabama football coach Nick Saban might not be ready in time for the Sept. 4 season opener against San Jose State.

Thad Turnipseed, the Crimson Tide’s director of athletic facilities, said the unveiling might have to wait until midseason in order to get it just right. The statue will honor Saban for the program’s latest national title.

“We’re about 65 percent there,” Turnipseed said. “Nobody’s rushing it. Basically it’s ‘stay tuned.’ Hopefully we can do it before the season starts, but we can’t push it.”

A memo presented to the board of trustees in June proposed that the statue be unveiled between Aug. 13 and Aug. 20.

The four previous Tide coaches to win national titles all have statues in the plaza area outside the stadium: Wallace Wade, Frank Thomas, Paul W. “Bear” Bryant and Gene Stallings. The same Oklahoma-based company, MTM Recognition, that did the first four is producing the Saban monument.

Turnipseed said the first two submissions — 3D photos of a clay model of the Saban statue — were rejected partly because the face and hair weren’t right. Saban, wife Terry, and Alabama athletic director Mal Moore will soon be presented with a third version.

“I don’t see this third time being 100 percent right,” Turnipseed said. “So they’ll go back and change it again. So now if you’re into the first of August before you’ve got anything you like, it still has to be cast. It takes four weeks to be cast. That’s why I don’t like the Aug. 20 date.

“I might be shocked. We could get it back and everybody loves it, we cast it and it’s all here.”

Turnipseed said he’s the picky one, not the Sabans.

“Mal, Nick and Terry are making the call,” he said. “I don’t want people to think Nick, Terry and Mal have been picky. I’m the one that’s controlling the schedule based on getting it right.

“They’re saying, ‘Thad, don’t rush. Just get it right.’ There’s no timetable in our mind. There never has been.”

The $50,000 project will be paid for by the Crimson Tide Foundation.

And now, Kige Ramsey makes his return to The Bama Blog video of the day with a trilogy off hilarity. Part 1, Part 2, Part 3.

Rolando McClain shows off the three rings — one from the SEC championship, one from the BCS and another from the school. Not a bad haul.

For more pictures from A-Day, check out the album with my snap shots and the videos.

Obama welcomes Tide to his house

Check out these AP photos from today’s reception at the White House. Read more later. 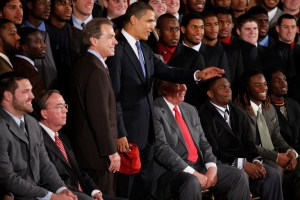 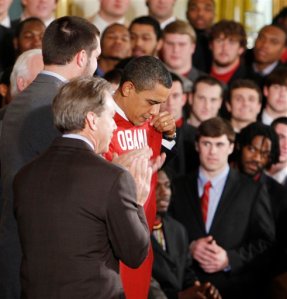 Read more later, but the Crimson Tide’s trip to the White House was just made official. The BCS National Champions will head to Washington to meet President Obama on Monday, March 8.

Check out this story from that Austin Statesman-American about Texas’ plans to send national championship gear to the earthquake-ravaged country. It turns out they have 14,000 useless t-shirts laying around since both schools playing in a championship game prints mementos before the fact.

I’ve seen stories about New England Patriots’ Super Bowl shirts going to Africa after the Giants stunned the world a few years ago, so this isn’t a new thing. But nice, nonetheless. Kudos to Texas.

Speaking of the Longhorns, check out this strange story coming out of Tuscaloosa.

Here is Nick Saban’s speech in two parts followed by a Rammer Jammer and some fireworks.

Welcome to the championship celebration

It’s about an hour before the festivities begin in Bryant-Denny and the crowd isn’t huge yet. Construction, meanwhile, continues as we speak on the north end zone expansion. Pictures to come later. 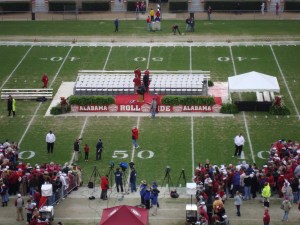 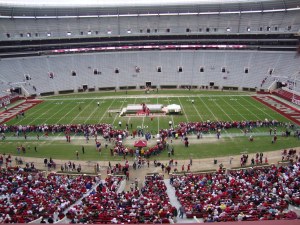 Check out this story from the Associated Press:

The Utah Republican, a fierce critic of the BCS, made the request in a letter to Obama Thursday.

Hatch wrote that because there is no playoff, fans are left to speculate whether more than one team deserves to be called the best in college football. Hatch was already irate that his home state team, Utah, didn’t get to play for the national championship last year despite going undefeated.

Last fall, he urged Obama to ask the Justice Department to investigate whether the BCS violated antitrust laws, but has yet to receive a response.

In Thursday’s letter, Hatch argued that inviting both teams will “send a clear message” that champions should be chosen on the field.

Bill Hancock, the executive director of the BCS, said it was up to Obama on whether to follow Hatch’s suggestion.

“But Boise State’s own coach, and every other coach in the USA Today poll, along with every journalist in the AP poll, agreed with what happened on the field in Pasadena — that Alabama is the national champion,” he said in an e-mail. “Really, doesn’t Congress have more important things to do?”

The current college bowl system features a championship game between the two top teams in the BCS standings, based on two polls and six computer rankings.

In 2008, shortly after his election, Obama said he was going to “to throw my weight around a little bit” to nudge college football toward a playoff system.

“In my view, inviting both these great football teams to the White House would be one particularly effective way to do just that,” Hatch wrote. “Furthermore, should you invite only Alabama, you would add legitimacy and credibility to a system we both believe to be flawed.”

The White House declined to comment on the letter.

Last month, a House subcommittee approved legislation that would ban the promotion of a postseason NCAA Division I Football Bowl Subdivision game as a national championship unless it results from a playoff. But the bill faces a tough road ahead in Congress.

Yet another Sports Illustrated cover for Alabama

For the third time since Iron Bowl week, Alabama lands on the cover of the definitive sports weekly, Sports Illustrated. The word “DYNASTY” can’t make Nick Saban happy if he’s hoping to keep his returning players grounded for next season. (Credit Gentry Estes of the Mobile Press-Register for being the first with the cover picture this morning)

On the topic of Sports Illustrated, I wanted to pass along a link to this story on SI.com by Andy Staples. I’ve heard differing opinions on it, but I am a fan. He stepped out of the box and tugged at the heart strings. Let me know what you think.

A collection of BCS videos

As a YouTube enthusiast, I’ve tracked down a collection of videos captured by you, the fans, from the BCS Championship. Enjoy and send me a link to anything I missed.

‘Yea Alabama’ on the violin and the mandolin

And the not so pretty: Clothed streaker hits Rose Bowl

Ingram touchdown from the seats

Celebrating on “The Strip” in Tuscaloosa

A “Roll Tide” cheer in church

And a few of mine.

Rammer Jammer from the field

Mark your calendars: The official national championship celebration is Saturday. Here are the details from the news release just received:

Now that the red-eye experience is over, Sunday was reserved for readjustment to the central time zone. And this ridiculous cold. I feel for the rest of you who dealt with this for a full week.

Now that all the traveling is over, the work continues. Stay tuned to the blog for updates on the official celebration and everything else surrounding Alabama’s 13th national championship.

Looking back through some files, I found one more video that I forgot to post. So here’s the team’s pregame entrance. Enjoy and we’ll catch you later.

So, this is it. Time to pack the bags, return the compact rental and get to the airport. It’s back to the frozen tundra of Northern Alabama for us.

But we’ll certainly take the memories of an incredible week on the over-night red-eye flights to Phoenix and Detroit before landing in Huntsville sometime Sunday.

What a week. What a season.

For a sports writer who started on the Alabama beat on A-Day in April, this has been one incredible journey. An undefeated season followed by a Heisman Trophy winner and then a national championship game played in the Rose Bowl? Really? I’ve really been spoiled all season and I appreciate your company along the way.

Before you know it, spring football will be here and we’ll be ready to start this carousel all over again.

(Photo by Me! on Newport Beach, Friday evening.)